IE7 and IE8 have native PNG support for alpha-transparencies, but it falls to pieces as soon as opacity comes into the picture. When setting any value for opacity, even 100% (i.e. filter: alpha(opacity = 100)), IE fills in the alpha-transparency of the PNG with a pure black fill. This is sometimes referred to as a 'black halo'. The alpha filter can be removed at any time to remove the fill and restore the alpha transparency, but supporting both requires using more of IE's proprietary filters. All of the follow examples should be placed in a IE-targeted conditional comment.

This is a great little hack that avoids the drawbacks associated with using AlphaImageLoader. The caveat is that it does not work for IE6, and the PNG may need to be tweaked a bit for it to display correctly.

Colorbox uses this technique for alpha channel support in IE8 and IE7. Credit for this technique goes to Dan Tello, and to Lukom for bringing it to my attention.

This is a less robust solution than the gradient filter, however it works well and is supported for IE6-IE8. The AlphaImageLoader filter displays an image between the background and the content.

This is how Colorbox enables PNG alpha-transparency support in IE6. Using CSS expressions are not supported in IE8 and their use is discouraged in general, but IE6 users have limited options here.

IE7 & IE8 lose ClearType whenever there an opacity filter is applied (ie. filter: alpha(opacity=50)). It even happens when the opacity is set to 100%. There are a couple of things that can be done to improve the situation. 1. Use a background fill if possible. 2. Remove the filter in situations where it would be at 100%. For example, if you animated an element from having 0 opacity to having 100% opacity. 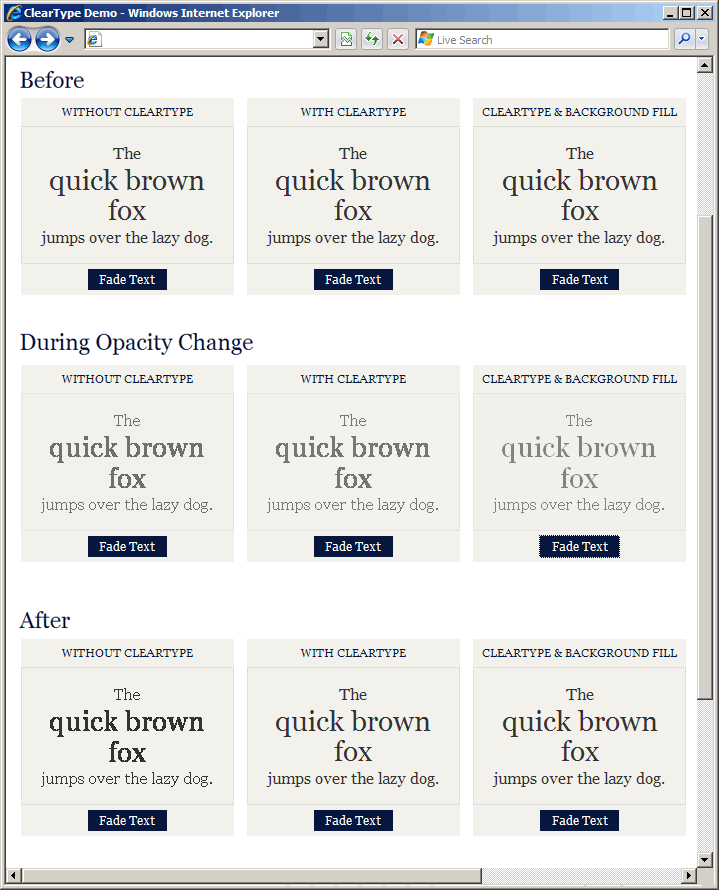 IE7, IE8, and IE9 all have some sort of defective opacity inheritance.

Follow me on Twitter and Github, that's where I'm most active these days. I welcome email (), but I'm afraid I no longer have time to answer personal requests for help regarding my plugins or posts. Thanks!